It has been a crazy few days…. I will try to recap as briefly as possible!  Scott was admitted to the ICU in Udon Thani for monitoring.  By the following morning, the doctor determined that Scott needed immediate attention.  We were taken by ambulance 1-1/2 hours (with lights and siren) to the town of Khon Kaen to the Queen Sirikit Heart Center where they performed an angiogram, angioplasty and inserted a stent.  The cardiologist was very pleased with the blood flow after this was completed.

To see the overwhelming amount of e-mail and Facebook messages that came to us over these few days, and to know that all our friends and family at home were praying for Scott and I during this time… words cannot express how loved we feel!  Thank you each and every one for your prayers and words of support!  God has been faithful to be with us every step of the way.

Scott stayed in the ICU there another day, then was transferred to an open ward.  The ICU, technology and doctors at the Heart Center were great, but the ward was not so nice…This is a government hospital, so the ward was crowded, beds close to each other, noisy, NOT clean and full of family members caring for patients. We were told a private room was not available.

Scott spent one night and then decided he felt good enough to leave – so he checked himself out (of course!).

While we were waiting for him to be discharged, in walk two of our sons, Jake and Matt, and Kevin Fraley!!!!  They had dropped everything (and flew countless hours!!!!) to be with us during this ordeal.  We love you guys so much – you cannot imagine how good it was to see you walk in to that hospital!!!!!!

Jake, Matt and Kevin went back to Udon Thani to retrieve the motorcycle…. it was still parked at the first hospital.  Matt rode it back to Khon Kaen for us.

Just before Jake arrived, he had fallen on his dirt bike and injured his left hand, but hadn’t had time to get to a doctor.  So…Scott suggested getting it x-rayed while he was in Thailand and have whatever needed to be done (wrapped or cast). The x-ray showed it had broken in 5 places.  He needed surgery to put in two wires to hold the bones in place.  The orthopedic surgeon was able to do the surgery that afternoon – Jake stayed two days in the hospital.  This is a different hospital (international and private) than the one Scott was in, so Jake had a private room with couch, tv, private bath, and lots of cute Thai nurses to take care of him.  There was plenty of space for all of us to hang out.

Kevin decided to get in on some of this medical tourism…. 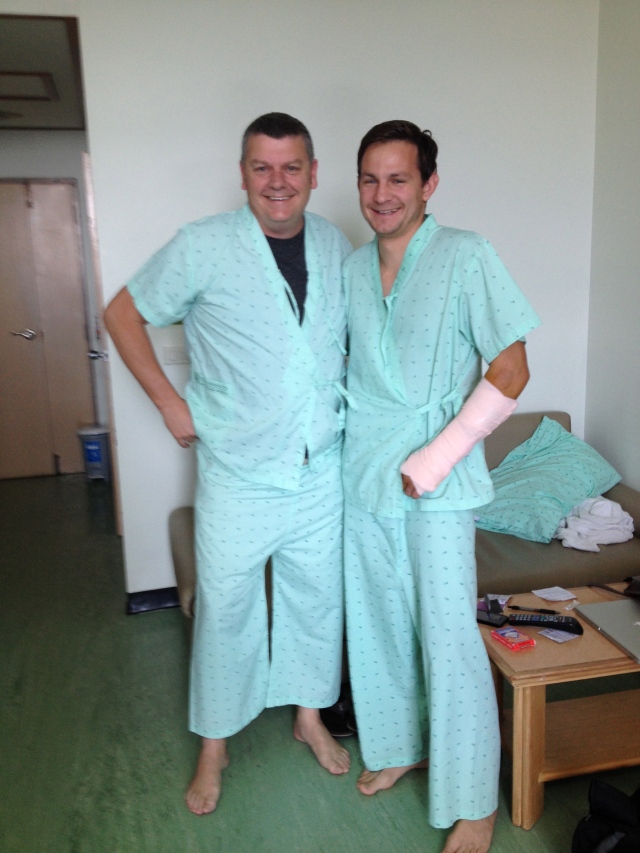 Medical tourism at its best 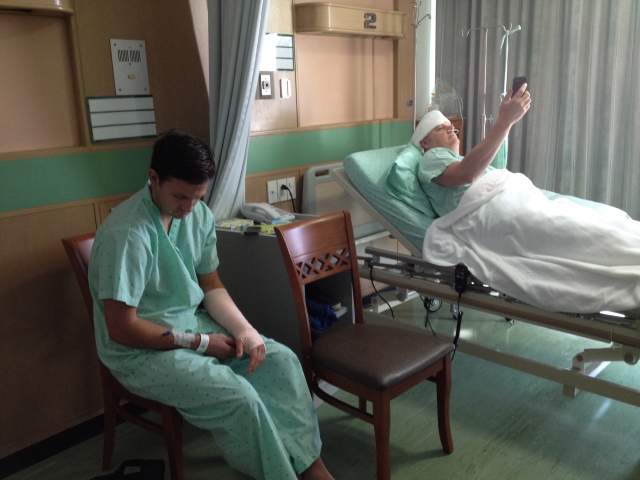 All too soon they were headed back home…

I guess Thailand is a pretty good deal for medical tourism…. heart attack $5,000…..orthopedic surgery $1,000…  however, I don’t think we’ll be promoting any tours!!

Scott decided he felt good enough to stay and travel further.   We are taking it slow…. His doctor from Kaiser recommends that he waits a few weeks to fly home.

…to Sappraiwan Grand Hotel near Phitsanulok, Thailand.  In this huge, beautiful resort, there was only one other guest tonight. 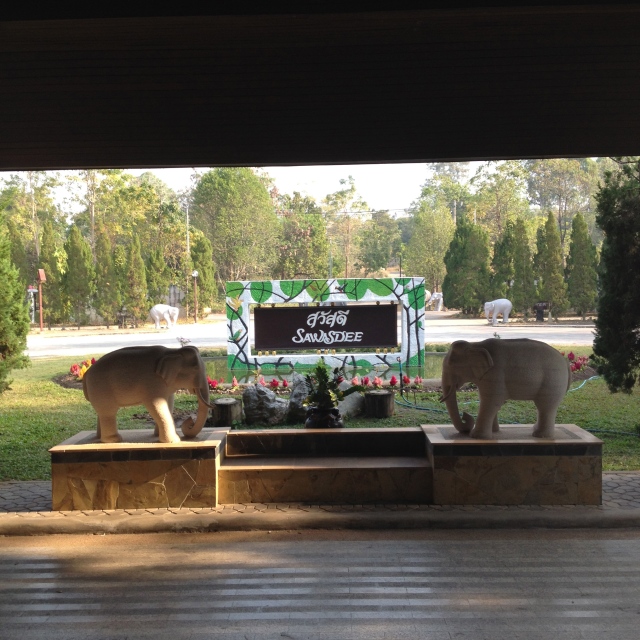 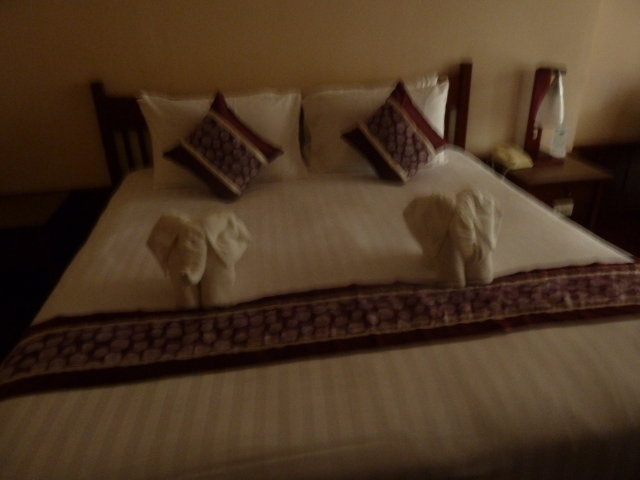 Sappraiwan Grand Hotel, Thailand – towels made into elephants, of course!

We enjoyed a restful night, then went out into the jungle with one of the staff (a Swiss gal) to find the elephants.

We rode a few hours to Chiang Mai.  Decided to stay two days to relax and plan the route we will take through the northwest part of Thailand – the Mae Hong Son loop – supposedly some of the best bike roads in Thailand.  The first day, we took a ride on Road 1096 around Doi Suthep Mountain.  We stopped to check out some waterfalls…. 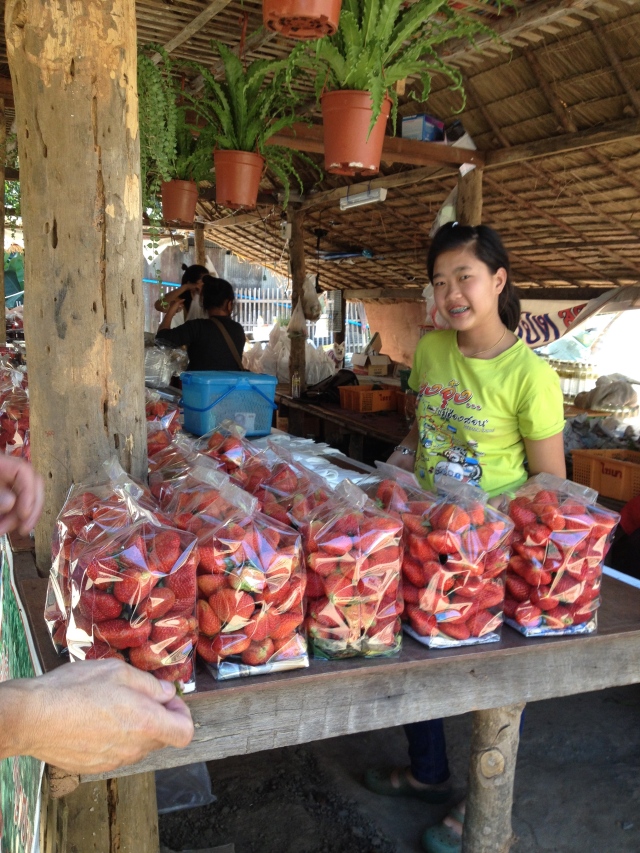 We stopped along this route (1096) at the Suan Bua Resort – beautiful property, nice suite for a great deal…. settled in for a peaceful evening… until the karaoke started.  On the lawn outside our window was an event (part of a conference) that included a karaoke contest late into the night.  It wouldn’t have been so bad if the people could sing….  Oh my… moving on….

We drove down 108 to Chomthong, then took 1009 toward Don Inthanon National Park… 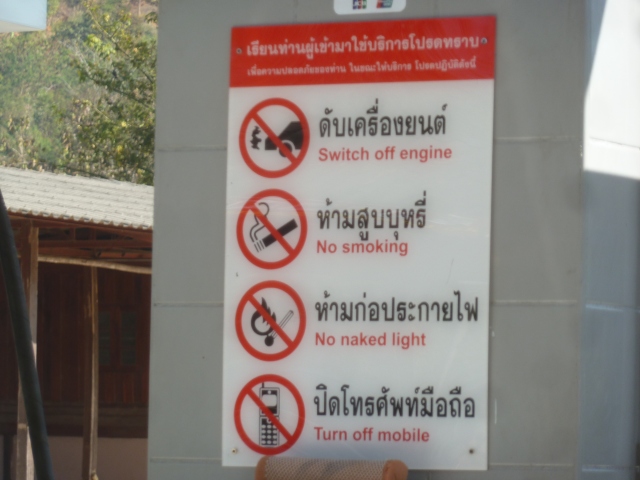 We arrived to the town of Mae Chaem, and found a great little B&B….

Chaem Muang House has a beautiful garden with lots of little nooks and crannies….the only place to stay in Mae Chaem! 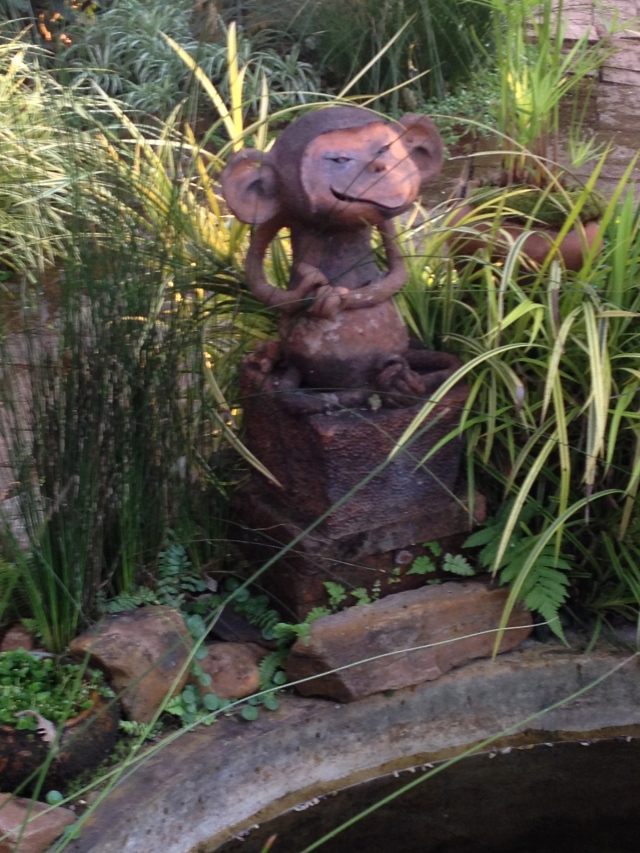 Our hostess directed us to a restaurant for dinner.  The view of the sunset over the rice paddies was pretty amazing!

Leaving Mae Chaem, we headed north.  The road wasn’t too bad – we had heard there were lots of potholes.  There are areas of the road that were a bit challenging, but the scenery is worth it! The road was REALLY curvy in some areas – with mirrors on many corners so you could see who was coming!  We took in some beautiful views….

Stayed one night in Mae Hung Son – a nice little town with enough tourism that we were able to have pizza for dinner!

Our ride today was short – only an hour, but full of twists and turns… 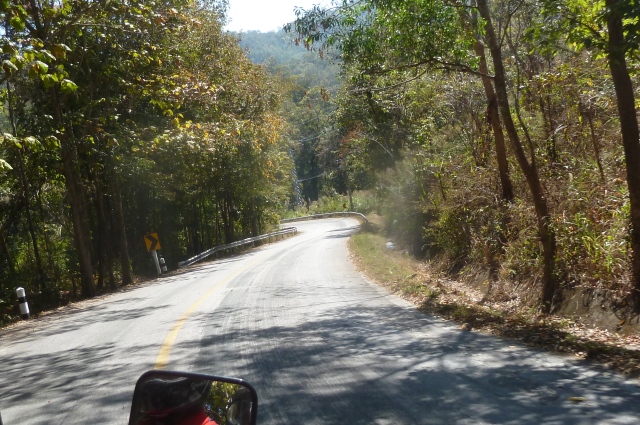 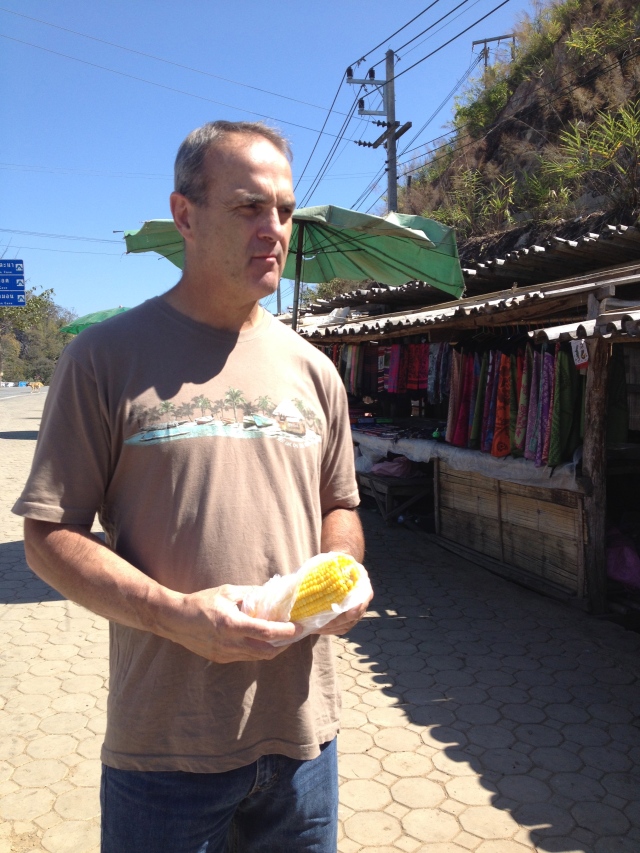 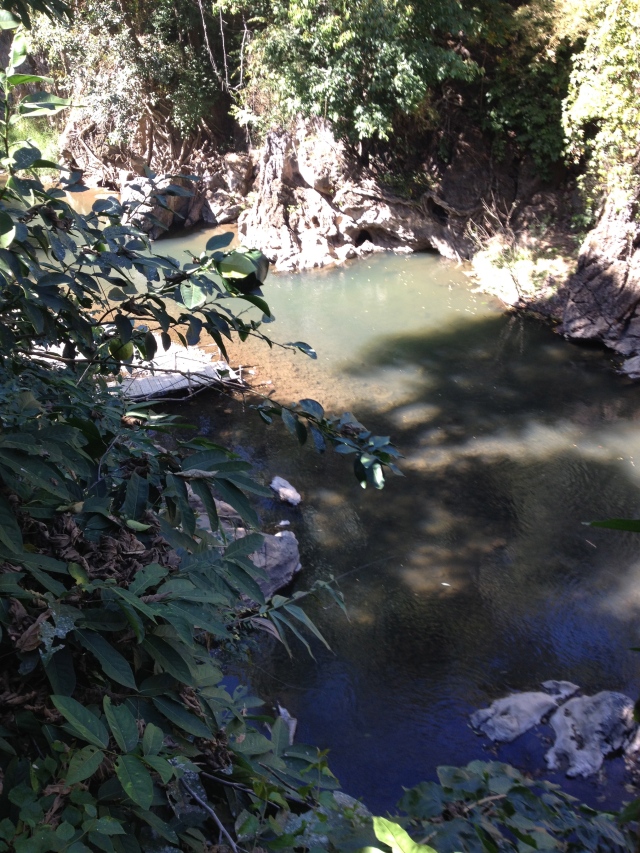 Tomorrow should find us back in Chiang Mai…There is a good hospital in Chiang Mai, so Scott’s going to go get checked again just to make sure everything is a-okay! He is feeling, in his own words….100%   🙂

Thanks again to each of you for your prayers and encouragement! We love you, our family and friends!

This entry was posted in 2014, Thailand. Bookmark the permalink.