We left Cozumel this morning, taking the ferry across to the mainland at 11:00 AM.  The seas were much calmer today and less wind than our voyage over.  The color of the Caribbean Sea is so beautiful…. 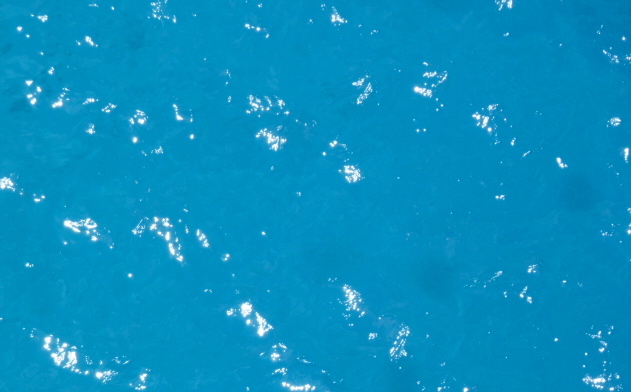 We rode up to Cancun to see if we could find another tire (thinking ahead, knowing that the used tire we got in Belize won’t last us too much longer) .  Cancun is a large city (in addition to the huge tourist area) – population of 600,000 – with a BMW dealer.   We rode to where the GPS indicated a BMW dealer was located.  The dealer had moved locations…  so we rode around until we saw  a motorcycle shop.  The owner didn’t speak English, but one of his customers came over to see what we needed.  He knew where the BMW dealer was now located and offered to show take us to the new loation.  We followed him as he rode his motorcycle.  He gave us his business card and introduced himself, Dr. Jose Kuri Fierros, a pediatrician in Cancun. 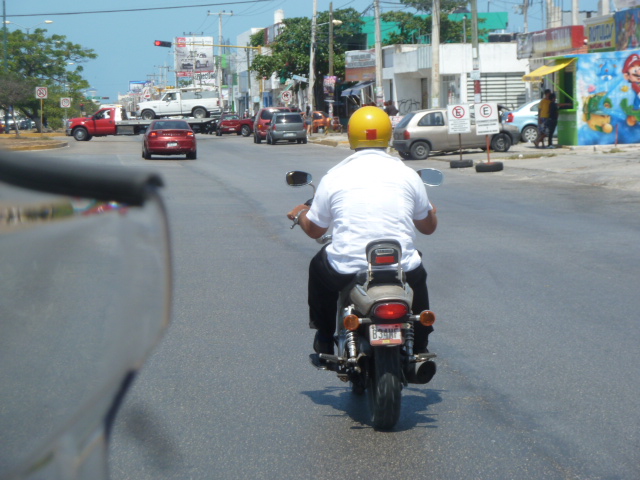 After riding for about 10 minutes, we arrived at the BMW dealer.  The dealer had just two front tires, so our friend took us to another shop.  They suggested we try the city of Merida – about 3 hours away.  Our tire is doing okay, so we shouldn’t have any trouble getting there.  Dr. Fierros shook our hands before he left, saying that we should know that we have friends in Mexico.  We are again amazed at the gracious hospitality of the people we have met on this trip!

After driving on the free road for a few hours, we decided to switch to the toll road since the sun was getting lower and we knew we could travel faster without having to slow for the topes at each village.  I had read about the town of Izamal online and though it might be a good stopping point… the Pope had visited this village in 1998…it is the oldest city on the Yucatan Peninsula…. it is considered one of the “magical” cities…. with cobblestone streets….all the buildings are colonial and painted yellow.  As the sun was setting, we pulled into town – were a bit dismayed at how primitive the village seemed – no cobblestone streets, no yellow buildings!  Perhaps we have missed the better section of town?!   We found the B&B I had seen online –  Macan che,  and Scott went to check it out.

Machan che B&B ended up being a very pleasant surprise!  Our room is new and spacious.

The pool felt great after riding in 95 degree weather all afternoon. 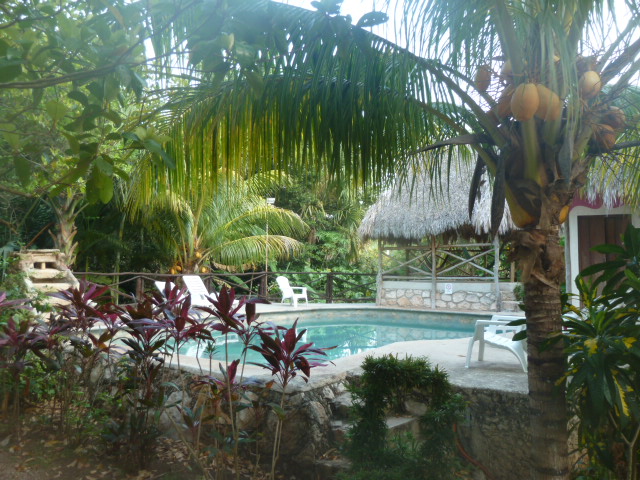 We had a delicious meal (Conchinita pibil chicken and fish with mango salsa) at the restaurant, ending with strawberry and coconut ice cream for dessert.

After breakfast at Machan che, we took off to explore the town.  We eventually found the town square and church – and cobblestone streets and yellow buildings, through the one-way streets were a bit frustrating, to say the least!

Trying to find a gas station was another challenge altogether.  After asking for directions at least four times and driving in circles, we finally found the gas station.  We headed north out of Izamal to the coast.  The road was a single lane for two-way traffic through the jungle.  Not too many other vehicles; however, we did encounter one spot where two trucks met – one had to pull over off the road to let the other pass.

The Yucatan Peninsula is very flat – no rivers or mountains – all the rivers flow underground through limestone, coming above ground in cenotes.  The road to the coast was lined with miles and miles of stone walls, a remnant of the haciendas (most are abandoned).  The haciendas were large, extensive ranches that produced sisal, used to make rope. 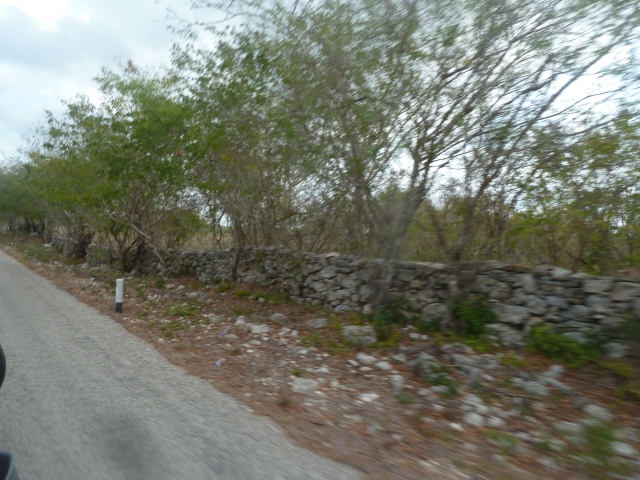 We reached the gulf coast at Dizilam de Bravo and took the highway (27) going west along the coast.  This area was hit in 2002 by a hurricane – we could see the damage in the small villages that we passed through –  many destroyed buildings and homes.

The view was great – alternating between lagoon and ocean. 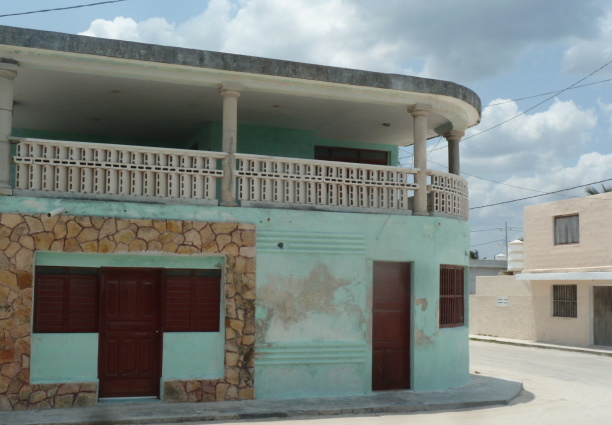 We saw the most amazing sight… WILD PINK FLAMINGOS! Sooooo many of them!

They are really very interesting to watch.  As they stand in the shallow water, they stretch their long necks down under the water to eat brine shrimp and algae.  The more brine shrimp they eat, the pinker they become.  The saying, “You are what you eat,” is really true of these guys.  The more I thought about this, isn’t that a good picture of how God works in us?  The more we seek Him and desire Him…the more we digest His Word and are obedient to Him… these things will result in us becoming more and more of a reflection of Him.  I want to be really, really “pink”- ha ha! Don’t you?!

We turned south at the town of Progreso and reached Merida, a city with a population of over 970,000.  Our hotel is on a beautiful street of historic buildings called Paseo de Montejo.

Monumento al la Bandera, Merida, Mexico – in the center of a traffic circle by our hotel

We found the main square and watched a group of Mexican couples performing a dance.  The ladies wore beautiful embroidered lace dresses and had colorful flowers in their hair. 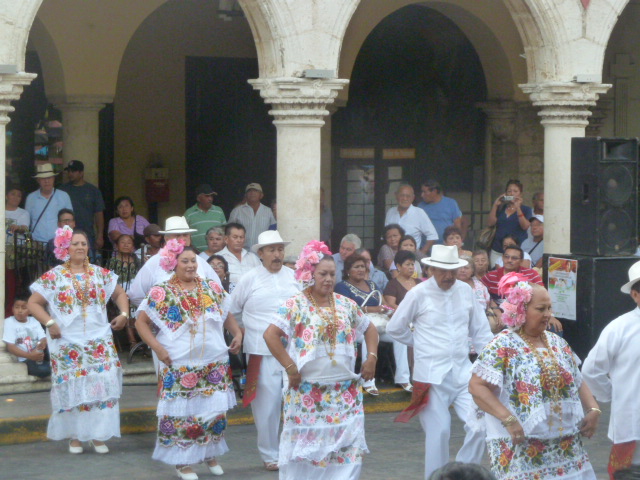 We had sorbet and sat on a bench in the square watching the people.  On Sundays, the streets around the square are closed to vehicles; many vendors and food stands everywhere.  There were clowns making balloon animals for kids and horse carriages for rides around the city.  Scott bought me a beautiful red rose…. 🙂  Riding around the city with one-way streets was again enough to do us in – but we eventually found a restaurant, had dinner, and got back to our hotel room!

Scott spent the morning finding a new tire for the bike – after 4 hours of sweating in the heat, he was successful! He got a very good deal on exactly what he wanted.  We got on the road after getting pizza….

The ride from Merida to Campeche is about 100 miles – but very hot – 101!  We reached Campeche, a nice town on the Gulf coast…

They have a diving board!!!! Campeche, Mexico

The historic section of town is a walled city – the walls were built in the late 1680’s to protect the town from pirates and buccaneers.  The colonial architecture is beautiful!  We had dinner in the older section and enjoyed walking around the town square afterwards.  We felt completely safe the entire time. 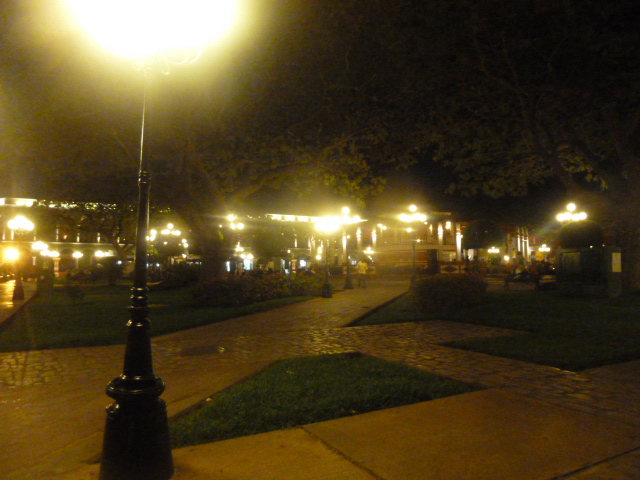 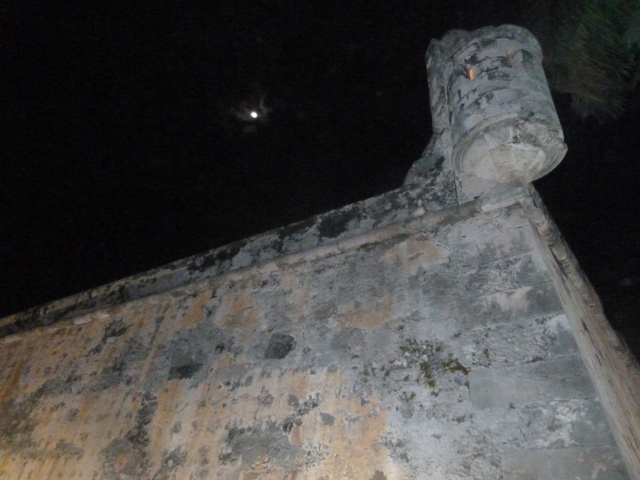 The circus is in town!  We spent an entertaining evening at a small circus in that is in town – clowns, jugglers, animal acts, acrobats, magician, archery sharpshooter….

The best act overall was the knife-throwing dwarf.  He picked Scott out of the audience to give him a hand…

Each time the dwarf was going to throw a knife, Scott would step aside.  He made sure Scott couldn’t move by chaining him in place! 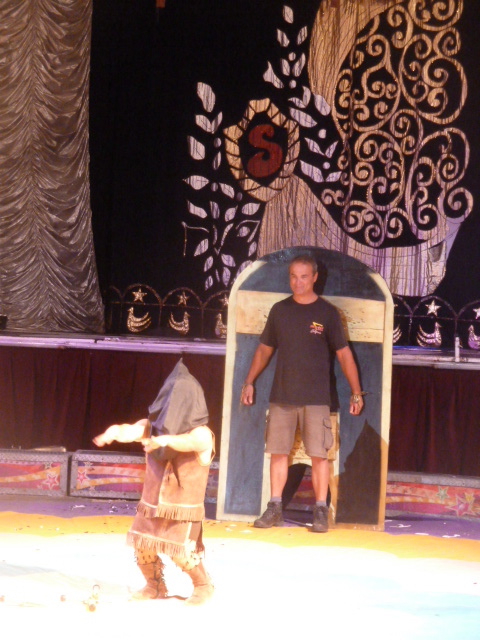 It was all quite entertaining!  He survived and enjoyed every minute.  🙂

We left early this morning to avoid the heat.  The first part of the ride was amazing – the road followed the Gulf coast with an spectacular view of the water. 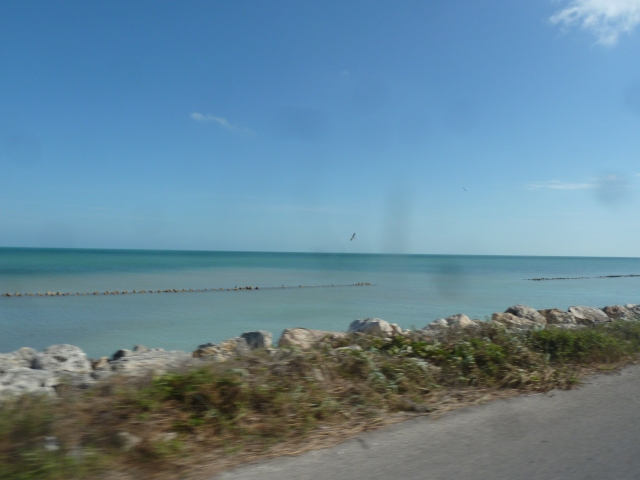 We stopped at one point to stretch our legs and admire the shell-strewn beach.

Our initial plan was to ride to Villahermosa – about 4-1/2 hours from Campeche…. When we got to Villahermosa, we found the hotels overpriced and the temperature way too warm – and nothing that we were too interested in seeing.  We made the decision to ride up to Veracruz….

The temperature began to rise…. 104 F….I could feel the sweat dripping into my eyes…the wind began to blow against us in hard gusts….the sugar cane fields were burning, filling the sky with a smoky haze….lots of truck traffic on the toll road….not a very good ride… 😦  Oh well – you have to take the good with the bad, right?!  Most days are spectacular, but then there are those like today when you are so glad when the ride is done and you get to a decent hotel!

Hot and smoky – between Villahermosa and Veracruz, Mexico

We arrived in Veracruz just as the sun was setting….10 hours on the bike….tired?!! Yep!!!!

We woke up this morning at 5 am by reveille!   Across the street from the hotel is the Mexican Naval Academy…  At noon, and again at 5 pm it was repeated – from our room we can see the parade ground.  We have come to the conclusion that trumpet lessons would be beneficial….

We had a fun day exploring Veracruz – walked around the town square and then visited the aquarium….saw some incredible fish, mantees, sharks and watched a dolphin show.   I took some great pictures…  When we got back to the hotel, I attempted to download them…. only to find they are gone…. I will post them here if I can recover them.  I think my camera is getting tired!!

Today’s ride was very interesting!  267 miles in 7 hours….We started from Veracruz on the Gulf Coast, rode south for about an hour to Route 175 to Tuxtepec and then to Oaxaco.

The ride from Tuxtepec from Oaxaco climbed into amazing jungle… 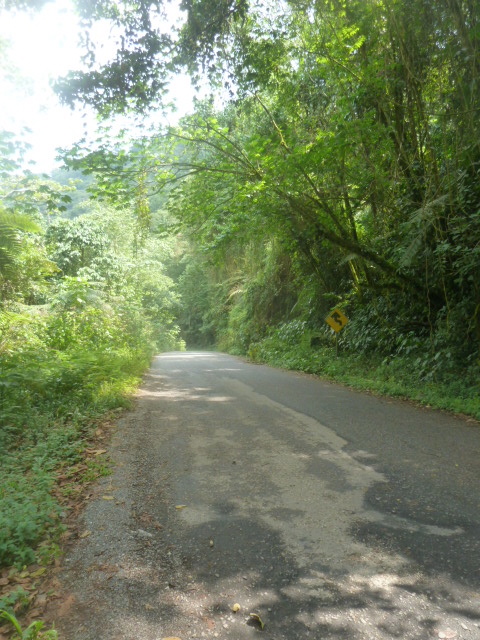 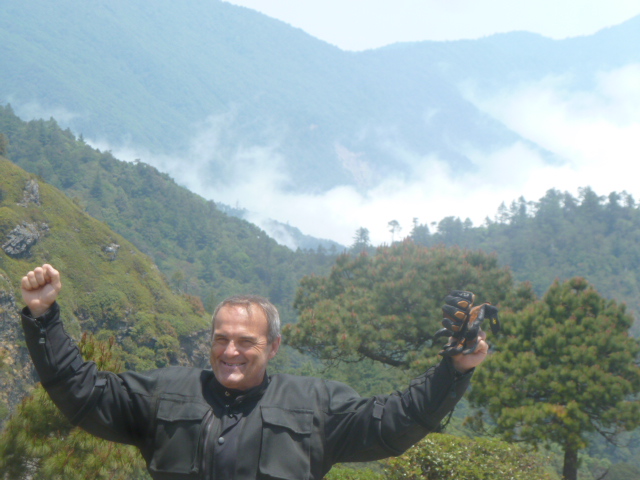 then dropped to desert with several types of cactus at 95F… 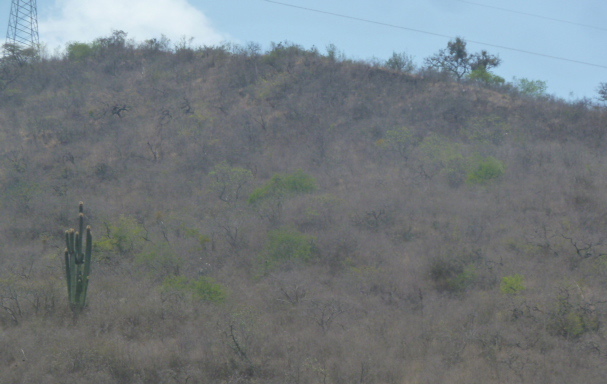 …then back up to pine forest.  The road was very curvy – this route is supposed to be one of the best motorcycle routes in the world.  It was an amazing ride!  The road was not very well maintained in some areas – potholes, jungle growth and in a few sections the road was completely gone – which made for some challenging moments! 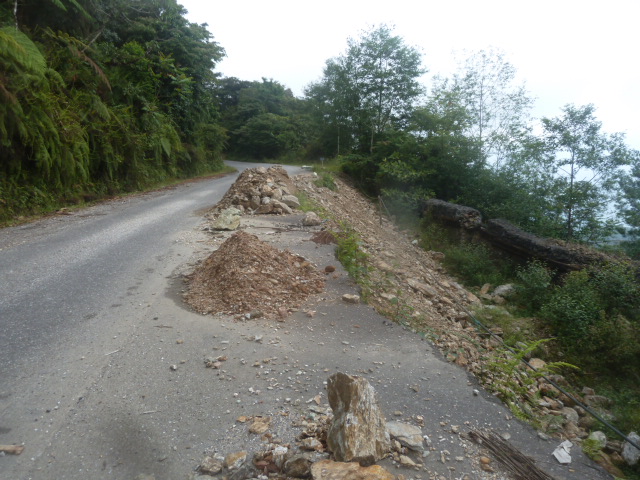 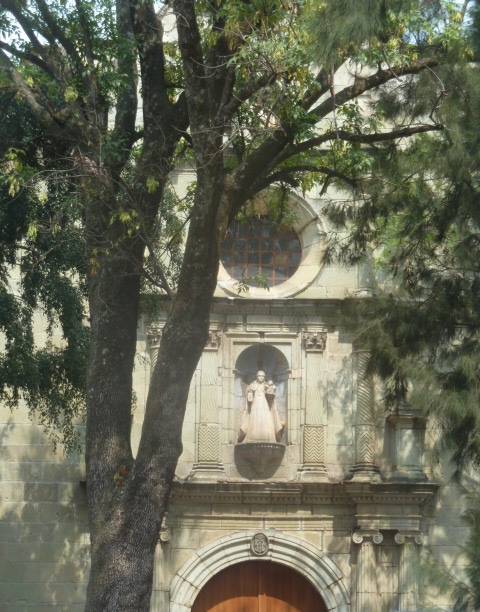 We arrived in Oaxaca in the afternoon and rested before meeting up with Riccardo Baglio and Guadalupe, from Mexico City (we met Riccardo at the border of El Salvador back in January).  We will be traveling with them for the next week, then returning to Veracruz for the BMW ride to Acapulco. 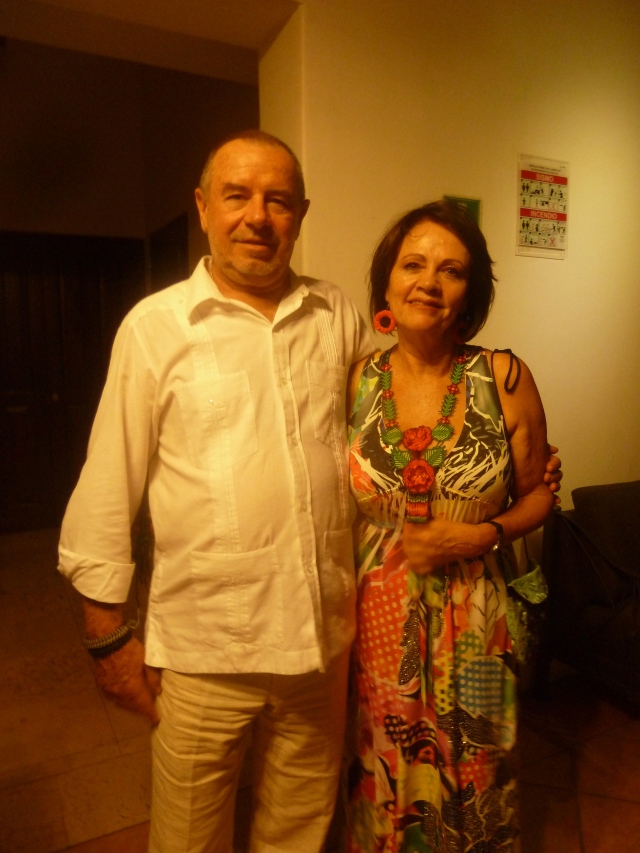 Guadalupe and Riccardo Baglio – our friends from Mexico City