We were up and on the road quite early – it was one of those “I’m sleeping in my clothes” hotels… Paradise Hotel in Choluteca Honduras (not my idea of paradise!)  The ride today was exciting due to the major potholes in the roads of Honduras.  Scott would swerve around them as best as he could, but finally realized we just had to go slow!  There are so many mac trucks and buses on the road – we would look ahead to see one coming straight toward us, either to miss a pothole or pass a slower truck, then quickly swerve back to their own lane. 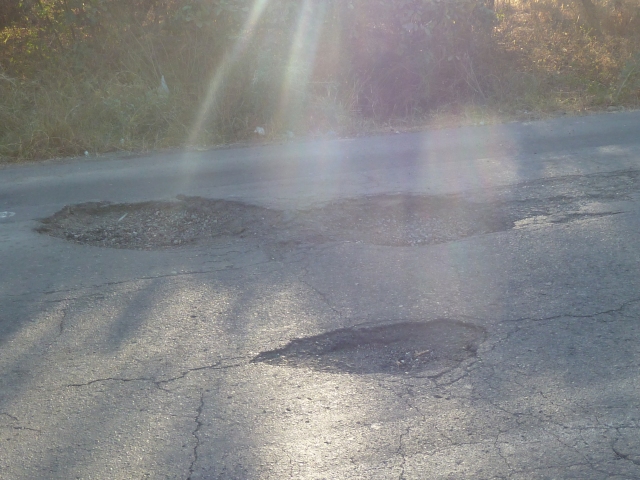 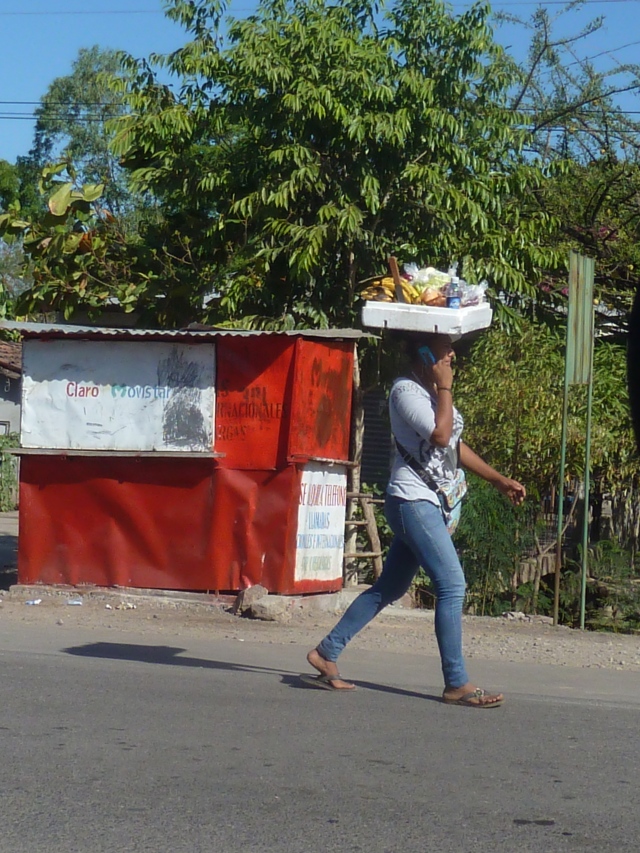 The border crossing into Nicaragua was pretty easy – we were through in an hour!

Nicaragua – truck with 5 trailers?! This one was having problems, but we saw others driving on the roadway.

Scott had to get some papers notarized for business at the embassy in Managua, the capital city of Nicaragua.  We stayed at the Crowne Plaza hotel last night, so I was able to wait for him in our comfortable room.  We drove the short drive to Granada on Lake Nicaragua.  This town is similar in some ways to Antigua – colonial architecture, town square, some tourists, etc.  The government is building what will someday be a beautiful malecon area along the shore of Lake Nicaragua. We were a little surprised at their 15% sales tax – even so, it is still inexpensive.

Colonial architecture and a guard in Granada, Nicaragua

We walked around the central area and ate some sandwiches we bought.  This little girl came up to us, wanting our food… how could we resist with that face?  Nicaragua holds the title to the second poorest country in the Americas. 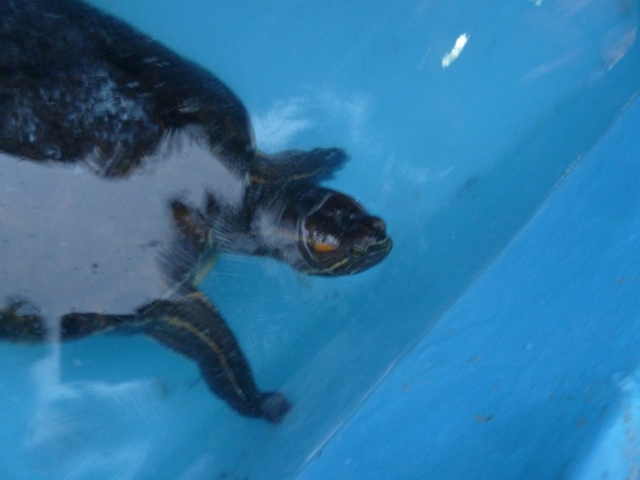 turtle in the hotel fountain 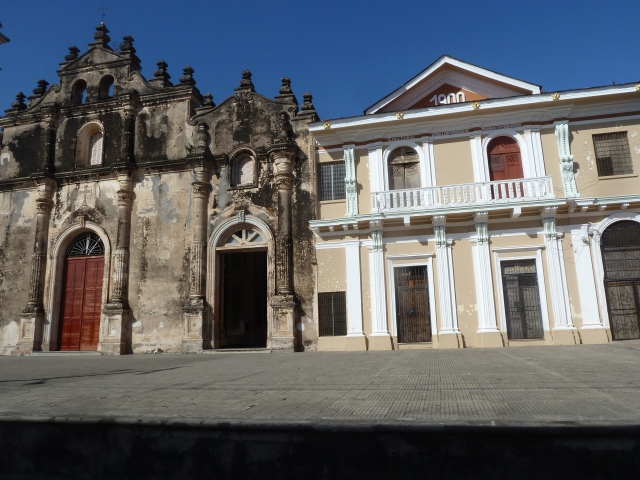 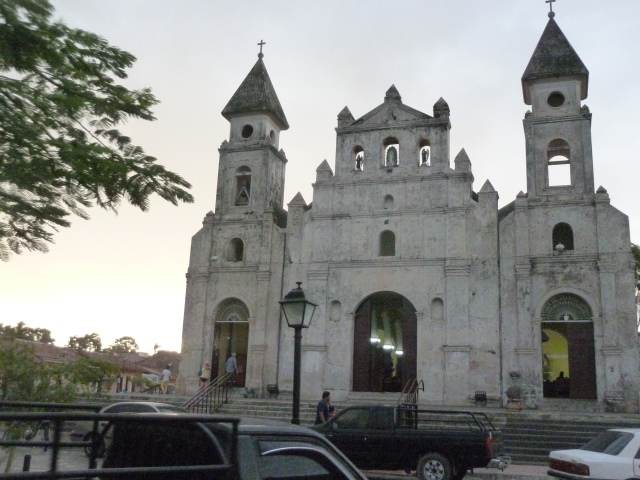 We met a guy who wanted us to take a boat ride – he would take us to an island where we could have lunch.  Sounded like fun, so we followed him for about a mile or two down the shoreline…

The ride was spectacular through the jungle and among a series of small islands. 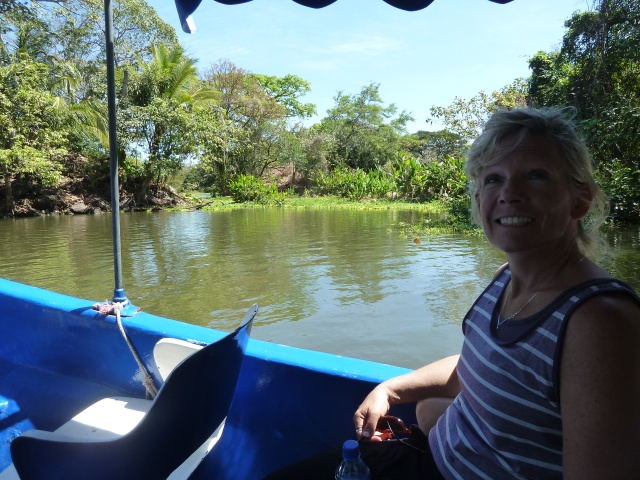 Want your own private island? This one is for sale!

At the restaurant, we met a group of men from Wisconsin who came to Nicaragua to go duck hunting…. top of your bucket list? 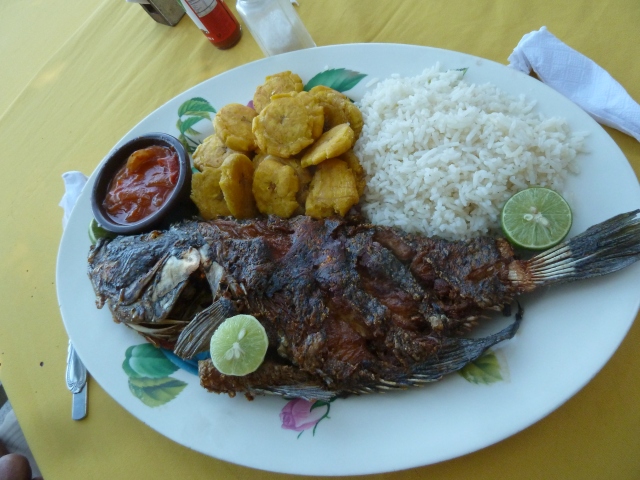 Pescado (fish) and plantains for lunch – delicious – never thought I would enjoy something like this!

Some of the islands had monkeys!!! 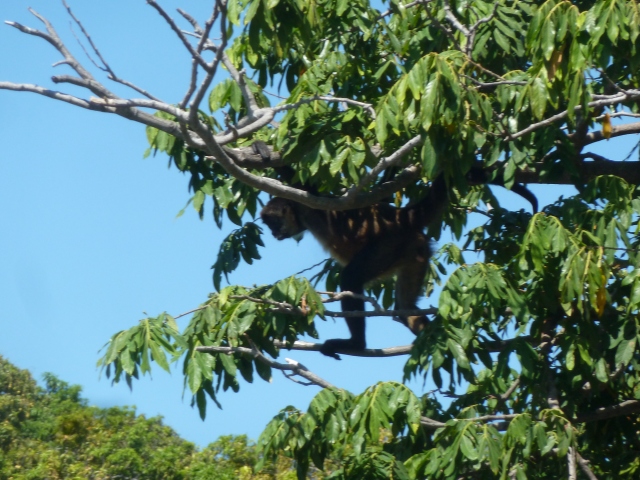 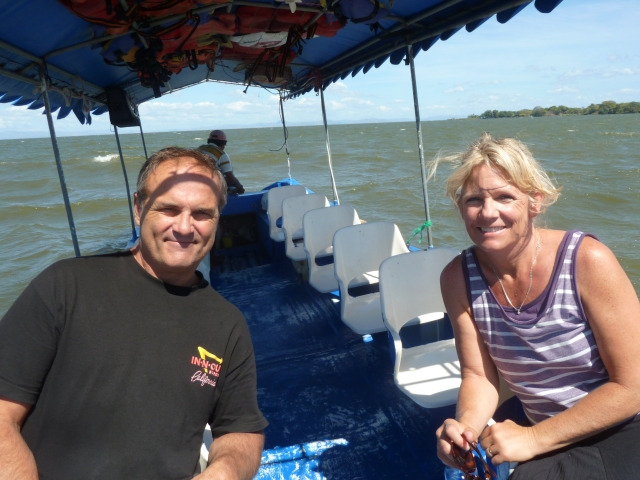 Today was girl’s day at the spa – wishing some of my girlfriends could have joined me!!!! Manicure, pedicure, facial and a 90-minute massage – all for $42….. what a wonderful way to spend the afternoon…. 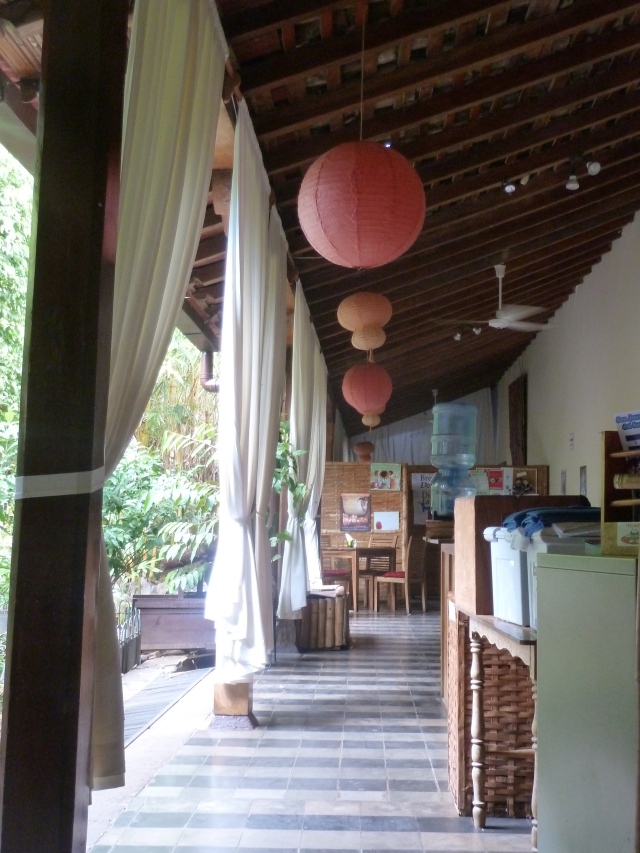 In the courtyard of the spa was a huge African tortoise named Napu. 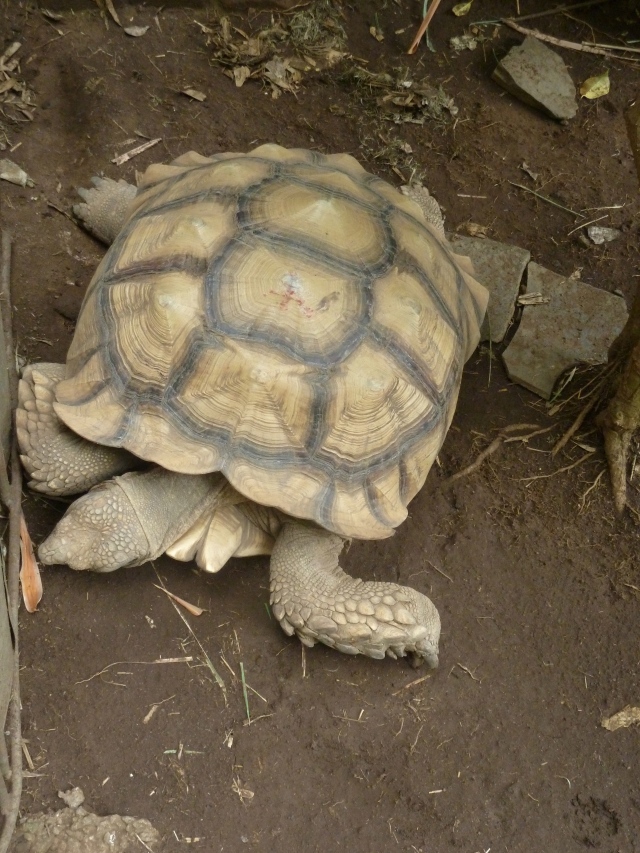 Napu, the African Tortoise – he is about 3 feet head to tail

He smiled for a picture! 🙂 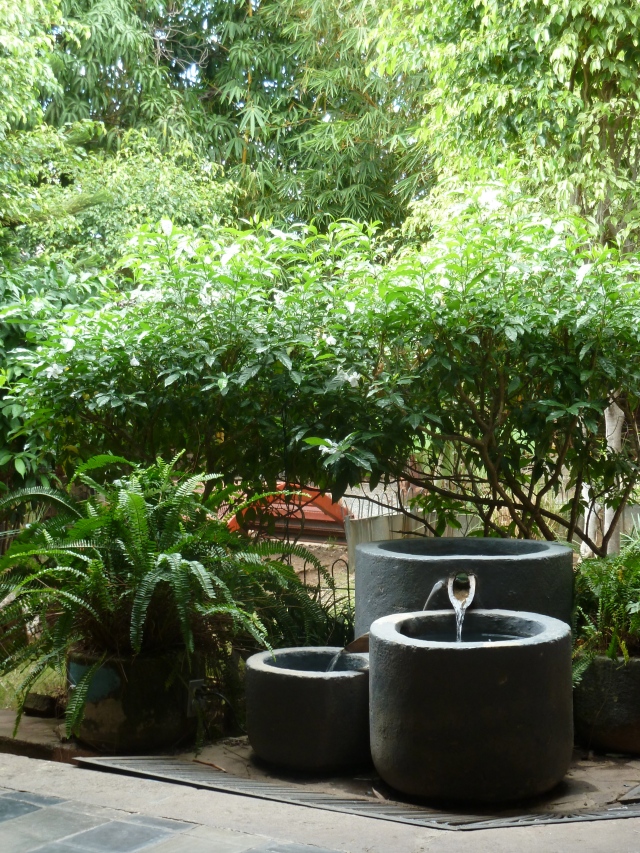 The garden at Pure Spa in Granada, Nicaragua

Scott got up early to see the sun rise….

The owner of the hotel we were staying in recommended riding up to see the Masaya Volcano, so we headed there this morning.  We can ride the bike to the top, so we figure we can handle it!  🙂

As we passed through the national park, guests are given hard hats to wear (for when the volcano spews rocks into the air).  We opted to keep our helmets on.  🙂  You can look right down into the center of the volcano – sulfur smoke steadily coming forth. 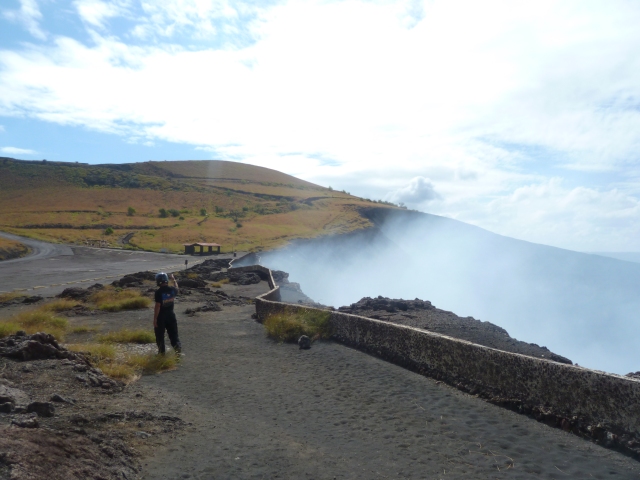 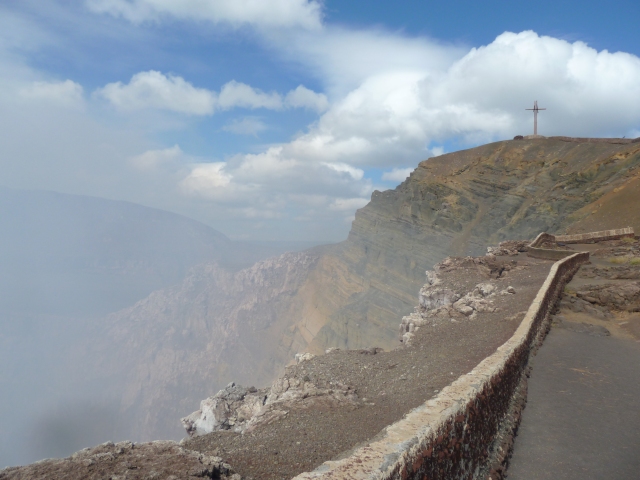 We rode toward the ocean and ended up at San Juan del Sur – ate lunch on this beautiful bay.

We heard there was a good beach for surfing north of the bay, so we followed a dirt road for 9 kilometers to Playa Maderas.  There are waves, surfers and a hostel, but no hotel.   Took another fork in the dirt road and found the Pacific Bay Hotel on Playa Marsella.  Beautiful hotel with a wonderful view.  A young couple, Gaby and Gabriel, are running the hotel.  They started 3 months ago… 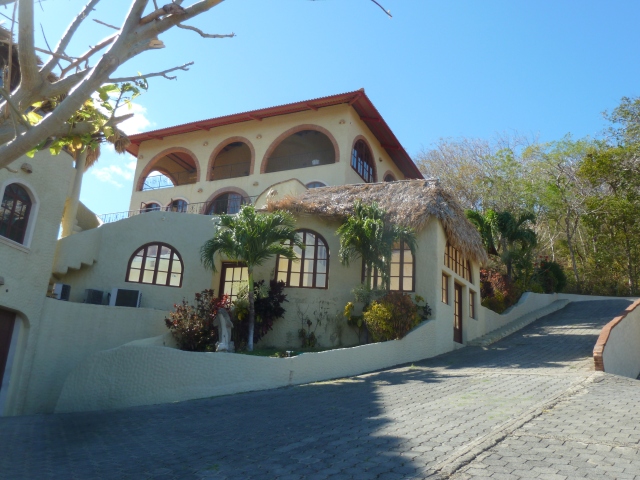 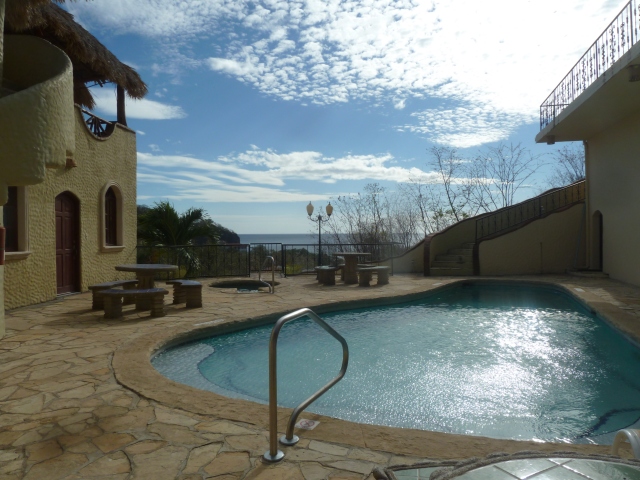 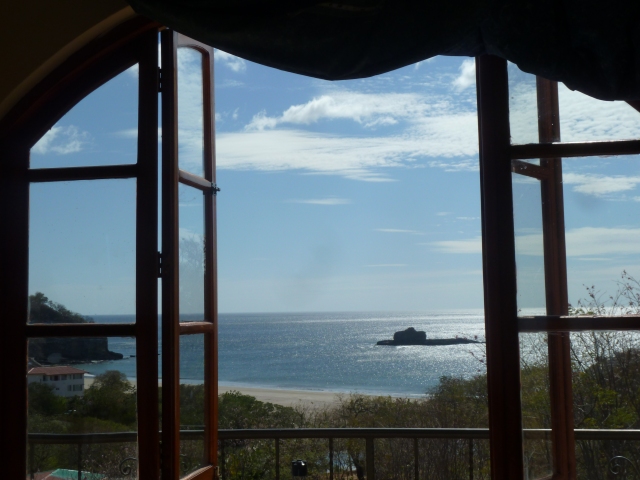 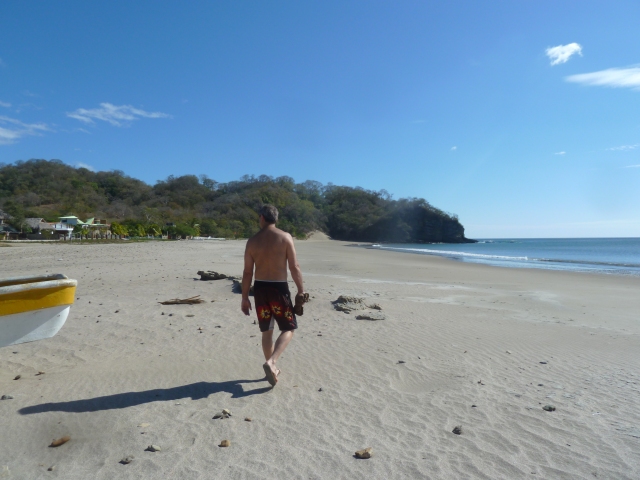 Playa Marsella, Nicaragua – a crowded beach – just us and the monkeys!

They are both chefs, so we are enjoying a delicious dinner on the veranda, watching whales spouting as the sun sets….